This year’s Final Four was in San Antonio, TX. Last year’s Final Four trip to Phoenix was my first time there, and now this trip was my first to San Antonio.  I did tons of research on where to eat before I left, and I am happy to say that I got to a good number of places I wanted to try.  Of course, like all trips, I missed some things and I want to go back and eat some more! Vacations are never long enough! 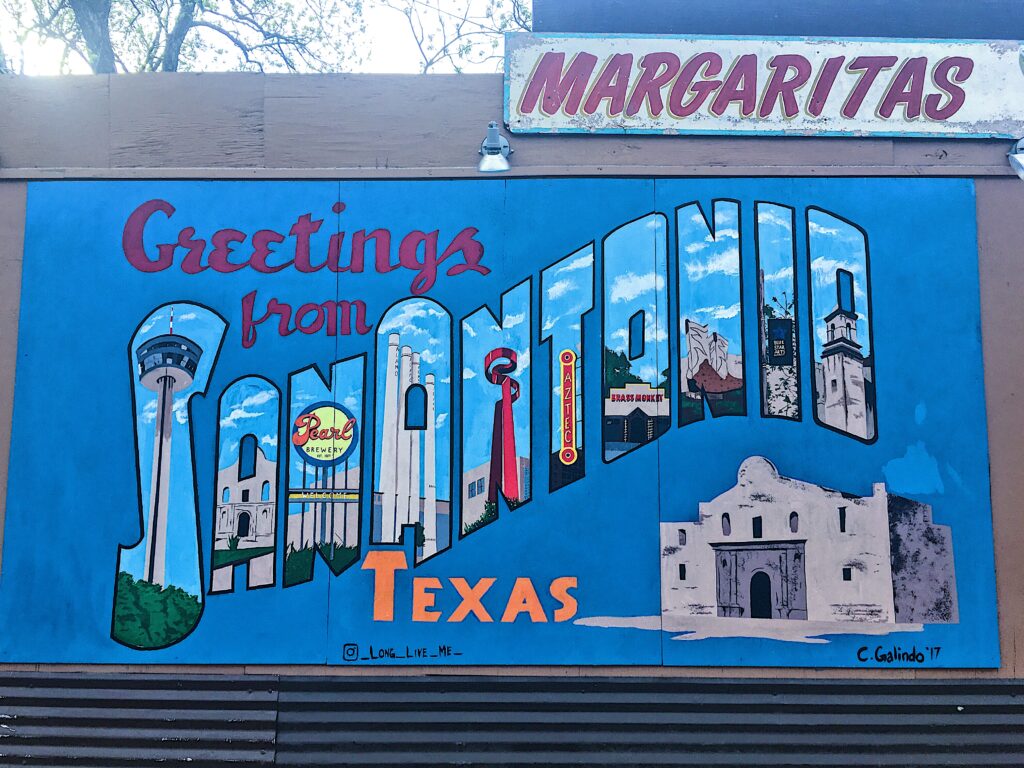 I arrived in San Antonio on Thursday afternoon, checked in to the hotel, and then immediately ventured out into the warm, sunny weather!  We walked just down from our hotel to the Riverwalk, an amazing stretch of restaurants, bars, shopping, and beautiful nature. We popped into the Iron Cactus because TexMex in San Antonio has to be good, right?  I went a little overboard ordering tableside guacamole, Mexican street corn, brisket quesadillas, and an Austin Eastsiders blood orange cider. I was so hungry and everything was so delicious that the only photo I got was a blurry photo of the cider.  The tableside guac might be the best guac I’ve ever had. The Mexican street corn was super unique – it came in a bowl (not on the cob) and had a hint of something like a vinegar.  It was so delicious and unlike other Mexican street corns that I’ve had. And the quesadillas. Wow.  So amazing.  The cider was the perfect accompaniment to this meal.  Not too sweet, but flavorful and delicious! 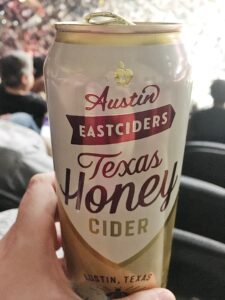 We then headed to the Spurs game. (Go Spurs Go!) where I had an Austin Eastsiders honey cider.  Another delicious purchase.  The food available at the game looked and smelled so delicious, but I was still stuffed from the Iron Cactus so I couldn’t bring myself to get more!  The food looked like it put other stadium/arena/sporting event foods to shame!  After the game, we were totally exhausted so we headed back to the hotel and went to bed.

The next morning we went to Rosella at the Rand for breakfast.  From my pre-trip research, it looked like a beautiful location, the menu had biscuits (which I always look for when planning a breakfast stop with my husband, especially in the south) so I went for it.  As a picky breakfast eater, the menu was a little tough for me, but I settled on avocado toast.  My husband ordered the biscuits, but they were out of biscuits!!! They offered to make the dish on an English muffin, which he ended up agreeing to, but we were there specifically for the biscuits! The avocado toast was really good, as was the iced mocha – my go-to travel drink! Unfortunately, the biscuit dish on the English muffin wasn’t our favorite, but as always, you win some, you lose some! 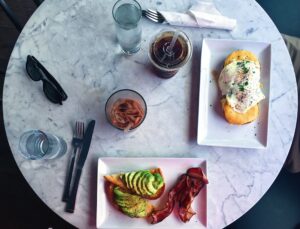 My husband then headed off to his conference so I roamed out on my own for awhile (Bird and Pear in La Villita is a great shop).  Then I headed back to the hotel, scrolled through Instagram, and seeing all my friends running photos motivated me to go out for a run.  Unfortunately, by the time I went it was hot and crowded, so it ended up being more of a run/walk, but I was glad to have at least gotten out for a bit.  I followed it up with some weights at the hotel gym and some time with my feet in the pool.  My husband got back from his conference sessions around 6 pm and neither of us had eaten since breakfast so we headed straight to dinner!

Rosario’s was recommended to us, but we were also on a timeframe because we wanted to be sure to make it to the Jason Aldean concert that night! One of the greatest things about the Final Four events is the free concerts! Friday seems to always be a country concert, and then Saturday and Sunday are usually pretty big names, but also much more crowded so we’ve made a habit of hitting up the Friday night concert!  We showed up to Rosario’s around 7 and there was a 30-minute wait.  We left thinking it would be too tight with the concert, but the restaurant smelled so good we ended up going back and waiting.  While we waited, we gorged ourselves on chips and salsa – some of the most delicious salsa I’ve ever had – and sipped on piña colada margaritas. The wait wasn’t bad at all.  There was a lot of activity and we had a place to sit so the 30 minutes flew by!  Once we got seated, I saw shishito peppers on the menu.  I cannot NOT order shishito peppers anywhere I go.  They are SO delicious and worth the risk of the spiciness. So, of course, I ordered these. I also ordered tacos.  This food was worth every minute of that wait.  It was so delicious! And the server even offered us to-go cups of water to take to the concert with us.  Such a great meal all around! 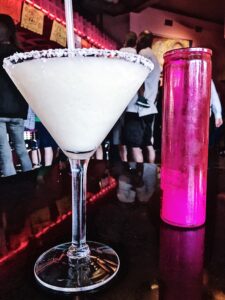 The concert didn’t come anywhere near the greatness of last year’s Keith Urban concert (which a year later, I’m still gushing over), but it was still a fun time!  Of course, we were totally exhausted by the end of it and our initial plans for a drink after the concert were canceled so we went to bed!

On Saturday morning we slept in and took our time in the morning.  We took a casual stroll up the Riverwalk to Pearl Brewery. Pearl Brewery is no longer an active brewery, but it’s buildings have been filled with restaurants and shops, and there’s a farmer’s market on the weekends.  I wish we left the hotel earlier, only for the fact that I wanted more time at Pearl!  I absolutely loved it.  We roamed the farmer’s market, put our name in at a restaurant, then grabbed some drinks at Bottling Department (and of course a cookie from Soy y Luna Baking Co!) and sat on the lawn and listened to the musician performing until our table was ready.

It took much debate for us to settle on Southerleigh for brunch.  There are so many amazing and delicious restaurants at Pearl.  I ordered the Caesar salad because it came with pickles on it! I couldn’t pass this up.  And I had the Pineapple Cocktail that was so amazing! My husband ordered the chicken and waffles, a side of grits, and a flight of beer. Everything was so good.  SO. GOOD. After brunch, I had to keep eating because there were so many amazing places I needed to try!  I didn’t get everywhere I wanted to try, but I did get ice cream at Lick, a chocolate chip cookie and a strawberry pop tart at Bakery Lorraine, and Cheerwine sorbet at Cured. Each and every stop was perfection.  I could have spent all weekend hanging out on the lawn, eating, drinking, and taking in the music and the people. It was the perfect way to spend the day. 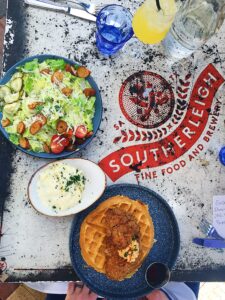 We then took advantage of the Grab a Buick program and got a ride back to the hotel.  We took it easy for a bit and planned a spot to grab dinner and watch the Final Four games. We ended up at The Friendly Spot.  This place was awesome! It’s a super casual outdoor space with a bar and food, a playground, and a giant outdoor screen with the games projected onto it. We had to go into the small building in the back for the first game because it was too light out to see the outdoor screen.  We then relocated to a great spot in front of the big screen for the second game. This time I had an Austin Eastsiders pineapple cider with a burger and fries.  I can’t think of a better way to watch the games! 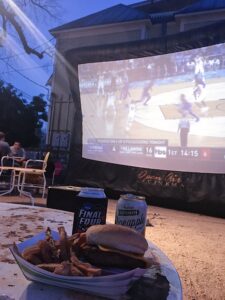 The next morning I set an alarm to get up early. As much as I love the slow, relaxing mornings, I also feel like much of the day is wasted when we don’t get out of the hotel till 11!  I got up and ran about 3.5 miles to the Art of the Donut.  It was hot, and I got lost a few times, but when I arrived I discovered that it was worth every single minute and every single mile. This place is amazing.  The donut options are out of this world, they have amazing sandwiches, and the coffee drinks are on point.  I ordered an iced Nutella latte which was so delicious and refreshing after such a hot run. I also kept myself under control and only ordered 2 donuts – Rainbowfest which was vanilla icing and fruity pebbles, and Chipmunk which was Nutella and Ferrero Rocher.  I also ordered my husband a Morning Glory which is a breakfast sandwich on a pretzel donut! I didn’t taste it, but he was a big fan.  The donuts were some of the best I’ve ever had.

I brought everything back to the hotel and we indulged in the deliciousness.  We then decided that we couldn’t leave San Antonio without seeing the Alamo, especially since it was across the street from our hotel so we spent some time there, before heading to meet a friend for lunch at Acenar (a sister restaurant to Rosario’s). I had Tacos a la Parilla which are tacos with pineapple on them! Such a brilliant flavor combination! 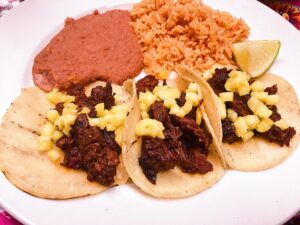 We then walked over to the Blue Star Arts Complex and grabbed coffees at Halcyon. I loved this spot and would love to go back for food.  The menu looks amazing and the coffees were delicious.  We roamed a bit more, then grabbed drinks and snacks at Blue Star Brewery. This place has a great patio, a great atmosphere, and a great vibe. It was a great way to spend a low key afternoon. 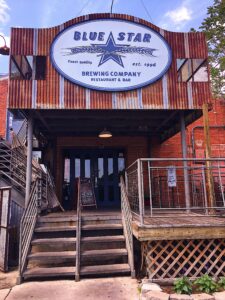 On the way back to our hotel we passed by The House Boozy Ice Cream and Booze.  When they explained the options for ordering, I couldn’t not order a flight of ice cream. A FLIGHT! My husband got an affogato with the Cafe de Olla Ice Cream infused with Patron XO Cafe.  I tasted the ice cream before he poured the espresso and immediately knew that the flight was the right call.  I needed to try as many flavors as possible.  I ordered Dirty Sailor, Mudslide, Dr. Chips, and Bourbon Vanilla.  They were all delicious.  Dr. Chips did not have alcohol in it, but it was probably my favorite because it had multiple textures.  I did a lot of pairing flavors and mixing and matching, but I really loved every single one. 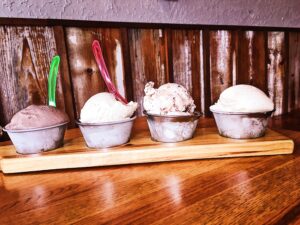 Our final meal was steaks at Josephine Street.  This was such a fun little spot and a great way to close out our amazing trip. This trip was really fantastic, and the food was beyond expectations.  I hit almost all the food spots I planned, and I have a nice long list of places to try the next time I’m there! I hope it’s sooner rather than later! 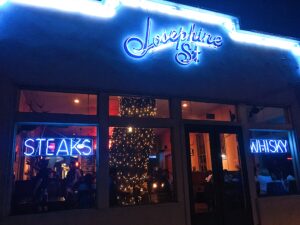