German Chocolate Cake is my dad's favorite cake, so it holds a special place in my heart. But I don't want to make the same cake year after year so I like to find ways to keep the classic flavor while changing it up to keep it interesting.

Milk and Lemon Juice - These two ingredients are a substitution for buttermilk. You can use buttermilk in this recipe if you have it, but it's not something I generally keep on hand. I always have milk and lemon juice on hand which works just as well.

Coconut and Pecans - These two ingredients make up the classic filling and topping to german chocolate cake. We're just putting it on brownies instead!

Melt the butter, then add cocoa powder and 1 cup of sugar over medium heat, stirring frequently. Once the mixture resembles smooth melted chocolate, remove from heat and cool for about 5 minutes.

Add the flour, baking powder, and salt, and mix well.

Pour into the prepared baking pan, and spread the batter around to edges. Bake at 350 F for approximately 30 minutes, until a toothpick inserted into the batter comes out clean.

In a medium saucepan, combine all ingredients except pecans and coconut, and cook over low heat until the mixture thickens.

Remove from heat and stir in coconut and pecans.

Let cool, then spread over top of the brownies.

Cut into squares and enjoy!

How do I cut brownies without tearing them?

Especially with these brownies, you don't want to lose the topping while you're cutting them. The best way to get clean cuts is to use a clean, sharp knife. I use a large, very sharp knife, and I wipe the knife off between every single slice. Every time the knife goes into the brownies, it's wiped down first. This helps keep the brownies from sticking to crumbs or batter or topping on the knife and gets clean and crisp cuts.

What's the difference between brownies and chocolate cake?

The texture of the two treats, and the richness of flavor are the key distinctions. Brownies tend to be richer, more chocolatey, and denser than cake. Cake tends to be light and fluffy and airy.

What is the best substitute for the eggs?

I have not tested any substitutions with this specific recipe, however there are some general egg substitutes that you can try. ¼ cup of applesauce or ¼ cup of mashed banana can serve as an egg substitute. You can also make a flax egg or a chia egg by combining 1 tablespoon of flax seeds or 1 tablespoon of chia seeds with 3 tablespoons of water. If you let it sit for a bit, it will take on an egg-like consistency. 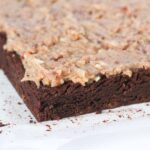 This post was updated in May 2021 with new photos, an updated recipe, and additional information about the recipe.