It seems like s'mores recipes are generally shared in the summer, but s'mores always feel like more of a fall treat to me. Cool, crisp, fall weather is perfect for cozying up with a blanket and hot chocolate (with Bailey's, of course) around a fire and roasting marshmallows! But I can't make a fire in the middle of downtown Boston, so I have to come up with some alternative options to get my s'mores fix. These Bailey's S'mores Brownies are the perfect touch to a cozy night.

How to make the graham cracker crust

Combine graham cracker crumbs, sugar, and butter until well-combined and the crumbs are fully moistened. Do not skip the sugar or butter, or the crust will not stay together! I never realized that the sugar plays such an important role in the crust holding it's shape, but you definitely don't want to leave it out or your crust will fall apart! You'll press the crumb mixture into the bottom of a lined 8x8 square pan.

How to make the brownie

Start by heating the Bailey's (you can use milk instead if you prefer) and butter until the butter is melted and the Bailey's is warm, but not boiling. Place cocoa powder and oil in a mixing bowl, and add the heated mixture to the mixing bowl and stir.  Cocoa powder only dissolves in hot liquid so it's important that the mixture is heated before adding it to the cocoa powder.

You'll then stir in the egg and egg yolk, and then the sugar. Add in the flour, salt, and espresso powder.  The espresso powder won't give it a coffee flavor, but will enhance the chocolate flavor. Lastly you'll stir in the chips.  I used a combination of Bailey's chips and chocolate chips, but you can use all chocolate chips instead if you'd rather.  The Bailey's chips are available at many grocery stores, but you can also order them online! You'll pour the brownie batter on top of the graham cracker crust and bake.

How to make the marshmallow topping

After removing the brownies from the oven, turn it up to broil, cover the top of the brownies with marshmallows, and then put back in the oven for 1-2 minutes.  Watch the marshmallows closely because they will burn quickly! 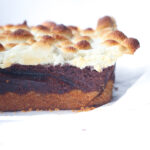