I’ve never been a big tequila fan, but I do enjoy an occasional margarita. There is just something so refreshing about them, and they’re the perfect balance to salty food (or a salty rim). Not to mention the bright color of the drink is super fun! This pie is equally refreshing in taste, and I love the bright and vibrant color that gives me hope of warmer days ahead! This pie has a perfectly tangy citrus flavor, with just a small kick of tequila sneaking in. And the light and fluffy meringue on top is the perfect complement to the sunny flavor of the filling. This pie reminds me of a warm and sunny day, but we all know a margarita is appropriate in any weather, and so is this mouthwatering margarita meringue pie!

You'll, of course, need a pie crust. As you know, I like to buy pre-made pie crusts, but you can also make your own from scratch if you prefer.

For the filling, you'll need egg yolks, sugar, corn starch, and water, which will combine to create the structure of the filling. You'll also need butter, tequila, lime juice, and triple sec to add the perfectly delicious margarita flavor to the filling.

The meringue topping needs just egg whites, cream of tartar, and sugar. You will not want to scale back the sugar here - it contributes not just to sweetness, but also to structure. It absorbs some of the moisture of the egg whites so if you don't use enough sugar, your meringue topping will not stiffen properly.

How to make Margarita Meringue Pie

While the crust is cooling, I prep the filling. This is an egg-set pie filling which means egg yolks combined with sugar, cornstarch, and water give structure and stability to the pie filling so that it doesn't flood when you cut a slice, but instead holds its shape! To make the filling, put the egg yolks in a small bowl off to the side, and on the stove, heat the sugar, cornstarch, and water until boiling.  The mixture will be thick and glossy and will begin to pop. Allow the mixture to boil for about 2 minutes, then scoop a bit of the hot mixture into the bowl with the egg yolks.

You do this so that the egg yolks don't heat up too quickly. If you were to add the egg yolks directly to the mixture, the high heat of the mixture would cook the egg yolks too quickly and they'd be more like the texture of scrambled eggs, which we, of course, don't want in a pie! Instead, we take some of the hot mixture out of the pot, and move it to the eggs so they're not immediately thrown into the boiling pot.

Once mixed together, the yolks will have been exposed to a higher temperature, so you can now put that warm mixture into the hot pot, and boil for another minute or two. Finally, remove the mixture from the heat and mix in the remaining ingredients until the butter is melted and the liquids are no longer separated, but instead forms one cohesive filling mixture. Pour the mixture into the cooled pie crust.

You'll want to add the meringue topping to the top of the filling while the filling is still hot.  This will help cook the bottom of the meringue a bit more quickly. If it's not hot, it could cause your pie to weep.  Weeping is when a liquidy layer forms between the meringue and the filling. It will appear as though the pie filling has not set, but in actuality, it's from the meringue.  Putting the meringue on top of a hot filling will help prevent this from occurring.

Once assembled, you'll bake until the meringue topping comes out beautifully brown and toasty! You'll then let the pie cool, and place it in the refrigerator to chill. This pie is served cold.

How to Store Margarita Meringue Pie

This pie should be kept in the refrigerator, and should last a few days. You can also freeze the pie and let it defrost for a couple hours before service.  Ideally I would not make this pie more than a couple days in advance.

What's the trick to making meringue?

Does meringue have to be cooked?

It depends on the method of meringue you are making, but in some form it should be heated because it is raw egg white.  In this case, we bake it right on top of the pie so we're good to go!

Do you need cream of tartar for meringue?

You don't actually need cream of tartar for meringue, it can stabilize with just egg white and sugar. I like to use cream of tartar as a bit of a back-up plan. It helps stabilize the egg whites, and since egg whites can be quite finicky, it never hurts to add a bit more stabilization! You should also be able to use lemon juice as a substitute for cream of tartar, but I have not tested this so cannot confirm. 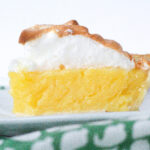 Looking for other meringue pie recipes? Check these out:

Looking for other cocktail-inspired recipes? Check these out:

This post was updated in May 2021 with an improved recipe, new photos, and additional information about the recipe.