Pop-Tarts are a go-to comfort food.  I don’t buy them often, but when I do, I just can’t help myself and I eat them every single day.  The warm, gooey insides and that sweet, crunchy icing on top just take all my troubles away! So what do I do when I want a Poptart, but I don’t have any?  I make them at home!  And when you make your own Poptarts you can make them any flavor you want. Sangria Poptarts are the Poptart of my dreams, and soon they will be part of your dreams too!  And you’re in luck because not only is a Sangria Poptart delicious, but it is super simple to make at home!

I use a packaged roll-out pie crust, but you can also make your own pie crust if you’re feeling extra ambitious! My personal preference is to only make things from scratch when they taste better from scratch, and I think the pre-packaged pie dough is just as good as from scratch, so I save myself the time and effort, but I support you in whatever decision you make! Regardless of which type of crust you use, you'll need an egg to use for an egg wash. Egg wash helps the crust achieve that golden brown baked goodness, and also helps seal the edges.

For the filling, you'll need fruit and wine. I use berries, mandarin oranges, and pineapples, but you can use whatever excites you!  I also like to include a little bit of cherry bourbon in my filling, but you can also use regular bourbon, or leave this out altogether. The filling also includes a little bit of sugar and some cornstarch to help thicken the mixture.

Lastly for the topping, you'll need powdered sugar, a bit of cream or milk, and you'll also use some of the filling. These measurements can be adjusted so you can control how thick you want the icing glaze to be - an added bonus of homemade Poptarts!

How to make Sangria Poptarts

You’ll start by making the sangria filling.  This involves boiling wine, fruit, sugar, and cherry bourbon or bourbon (if you'd like!) for about 45 minutes to an hour.  This takes a bit of time, but it takes no work!  Watch a show and hop up to stir it at every commercial break. Once the sangria mixture has reduced to a jam, let it cool. Watch another show to pass the time.

Once cooled, you’ll mix the jam with cornstarch to thicken it up a bit.  This will help keep it from leaking out the edges. Then you’ll roll out the pie crust and cut it into rectangular strips. Put some sangria filling on one half of the rectangle, leaving the edges uncovered.  Brush the edges with egg, and then fold the other half of the rectangle over onto the half with jam. Seal the edges tightly, then press around the edges with a fork. Brush the top of each pop tart with egg, and place on baking sheet.  Once all your pop tarts are ready go to, pop them in the oven to bake.

When they’re done, they’ll need to cool before you ice them.  You’ll use some of the leftover sangria jam mixed with some powdered sugar and a bit of milk or cream to create the glaze on top. It’s generally easiest to glaze them by placing a wire cooling rack on top of a baking sheet.  I usually line the baking sheet with parchment for ease of clean-up at the end.  Then when you glaze the sangria poptarts, the extra drippings fall through to the parchment below. This way, you can glaze as much surface area as you like.  And I like a lot of glaze!

How to Store Sangria Poptarts

Sangria Poptarts can be stored in an airtight container at room temperature for a week or two.

Can you eat Poptarts without toasting?

While boxed Poptarts can be eaten right out of the package or placed in the toaster, these are baked, cooled, and then frosted, so they are not raw when you eat them. You will not want to put these in a toaster because it will likely melt the frosting and that will drip into the bottom of your toaster and burn…and nobody wants that!

I think these are perfect at room temperature, but if you did want to warm them up, you could try a few seconds in the microwave, or maybe try the toaster oven where it will sit flat. I have not tried this, but let me know if you do! 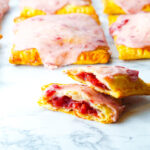 Looking for other Poptart recipes? Check these out:

Looking for other Sangria recipes? Check these out:

This post was updated in May 2021 with new photos and additional information about the recipe.