I love warm, fresh cinnamon rolls in the morning, but I don't have the patience to knead dough and wait for it to rise, so I tend to go for the canned version instead. The upside of making them from scratch is that you can create much more flavor variety in your fresh-baked breakfast treat, but you can easily spice up canned cinnamon rolls with just a couple extra steps and still have a warm and tasty semi-homemade breakfast in less than an hour! These Canned Cinnamon Rolls with Apple Pie Filling and Brown Sugar Honey Glaze need just four ingredients and are sure to significantly improve your mornings!

These easy honey-glazed cinnamon buns are the best breakfast, a cozy fall treat, or the perfect dessert for your High Holiday celebrations!

Canned Cinnamon Rolls - While this sweet spiced recipe calls for canned, homemade cinnamon roll dough will work for this delicious treat as well. You'll just add the pie filling before you roll them up! If using store-bought, pick out your favorite brand, just be sure the dough is rolled up and not sliced so that you can unroll them - no yeast or kneading needed!

Honey - Instead of the frosting that comes with the canned cinnamon buns, these warm, gooey treats are topped with a brown sugar honey glaze.

Preheat the oven according to the instructions on the can.

Unroll one cinnamon bun at a time, and roll a rolling pin over it to make the strips a bit wider.

Line the inside of the dough with the apple pie filling (and replace any cinnamon filling that came off the dough).

Roll the dough back up, making sure the dough is rolling overtop of the apple pie filling and is not pushing the apples out.

Place the cinnamon apple pie rolls in an ungreased pan, and bake 20 minutes or until golden brown.

What's the difference between cinnamon rolls and cinnamon buns?

Cinnamon rolls are a cinnamon-filled dough, rolled up and topped with icing. Sticky buns are similar but have a glaze instead of icing. Some people consider a cinnamon bun to be the same as a cinnamon roll, but others consider cinnamon buns to be sticky buns. Regardless of what you call them, they're all delicious!

How do you keep cinnamon rolls from getting hard?

If you don't eat these apple cinnamon buns while they are warm, they should be sealed well in an airtight container and can be stored at room temperature for a few days.

Why do we eat apples and honey on Rosh Hashana?

There are numerous reasons why apple is the fruit we dip in honey for the holiday, but the general purpose of the apple dipped in honey is to represent sweetness for the year ahead. 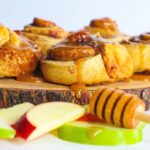 Make sure to buy the cinnamon buns that are rolled up, not sliced. If you use Pillsbury, you need to buy Grands. When rolling the apple pie filling into the cinnamon-lined dough, use your hands to keep the apple pieces from coming out the sides.

This recipe was originally posted on September 5, 2018, but was republished with additional information about the recipe in August of 2022.