I made these a couple years ago after the most amazing cinnamon roll I’ve ever had, from Phoenix Public Market & Café during a trip to Phoenix (you can read about the full trip here). Everything about this cinnamon roll was absolutely amazing, but the best part was the icing.  It was so light and velvety.  I was inspired to create cinnamon roll cupcakes with a frosting that replicated the heavenly texture of this icing. And this recipe does exactly that.

This recipe alternates layers of cupcake batter with layers of cinnamon roll filling, topped with the most divine frosting that perfectly complements this sweet, cinnamonny cupcake. The cupcake batter is made the same as others, though there is a uniqueness to it with the sour cream, but don’t worry, you won’t taste it! First beat together the butter and sugar, which whips in air to make for a light and fluffy batter. Then the eggs and vanilla are mixed in, followed by alternating in the dry ingredients and sour cream.

The cinnamon roll filling is also super easy to make, by combining melted butter, cinnamon, and brown sugar. Then put a little bit of batter in each cupcake wrapper, followed by cinnamon filling, and continue alternating until the paper liner is full. You can use as much or as little of the cinnamon filling as you’d like. After each cinnamon layer, I used a toothpick to swirl it through the batter a little bit.  You can also do this with a knife, or you don’t have to do this at all and the cinnamon filling can be in layers instead of swirled through.  There is a lot of flexibility to make these cupcakes fit your preferences!

Once you bake the cupcakes and let them cool, it’s time for my favorite part – the frosting! All the frosting ingredients are beat together, until the texture is smooth and velvety and sweet. If it’s not holding its shape, you can add more powdered sugar. If it’s too thick, you can add a little bit more milk, but add the milk in very small amounts at a time so the frosting doesn’t get too soft and runny. 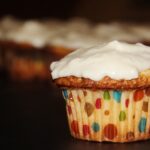