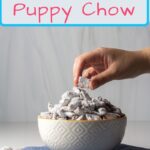 Puppy Chow, which some people call Muddy Buddies, might be the absolute best snack to exist. Chocolate, peanut butter, powdered sugar, what’s not to love? The original muddy buddies recipe uses Chex cereal as a base, and though it makes a mouthwatering snack, I wanted to give it a little extra pizzazz. Cinnamon Toast Crunch Puppy Chow adds a perfect hint of cinnamon flavor to this already incredible treat. This super quick and easy recipe takes less than 10 minutes to make and no baking is required!

This recipe is perfect for parties or game days, and also makes the best back to school or Christmas and holiday gifts! If you love cinnamon treats, you'll also love these French Toast Cookies and Cinnamon Roll Cupcakes.

I love this ultimate snack recipe because you can create so many variations by changing up your mix-ins and because you can have this super scrumptious treat in no time at all! Using Cinnamon Toast Crunch cereal instead of Chex cereal adds a hint of cinnamon, adding more deliciousness to an already delicious treat!

You can also spice it up with fun mix-ins like m&ms, chocolate chips, nuts, or anything else that excites you. This yummy homemade treat is unbelievably easy to make, which is important because it's so hard to stop eating it!

Peanut Butter - The peanut butter coats the cereal with a richness that also helps hold all the delicious coatings on to the cereal. Creamy peanut butter is my preference for this dessert trail mix recipe, but if you don't have it, crunchy peanut butter works too.

Chocolate Chips - Like the peanut butter, the melted chocolate helps coat the cereal and allows the powdered sugar to stick to this sweet snack mix.

Cinnamon Toast Crunch - Traditional Muddy Buddies are made with rice Chex cereal, however, puppy chow can be made with a variety of cereals so feel free to play around with it and try different flavor combinations!

Step 2: Melt the chocolate, peanut butter, and butter on the stove or in the microwave till smooth and pour the melted chocolate mixture over the cereal.

Step 3: Stir until the cereal is coated in the smooth chocolate peanut butter mixture.

Step 4: Put the cereal and chocolate mixture in a large zip-top plastic bag with some powdered sugar, and shake it until everything is covered in powdered sugar.

Puppy Chow is the midwest name for this delicious treat because people think it looks like dog food. If you've never had puppy chow, don't let this deter you. And don't be fooled by the name - this delicious snack is for humans! If you have heard it called Muddy Buddies, that is the official name that Chex came up with to promote this amazing snack that usually features Rice Chex cereal.

What are other names of puppy chow?

While the name puppy chow stems from the midwest, in addition to muddy buddies, this irresistible treat is also known as monkey munch or reindeer chow, amongst other fun names!

Tip #1: If using bar chocolate, chop it before melting it.  It will melt quicker and more evenly if it’s in smaller, evenly-sized pieces.

Tip #2: The chocolate, peanut butter, and butter can be melted on the stove over medium-low heat instead of the microwave. 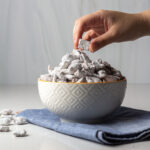 If using bar chocolate, chop it before melting it to ensure it melts evenly. The chocolate, peanut butter, and butter can be melted on the stove over medium-low heat instead of the microwave.

This recipe was originally posted on January 21, 2019, but was republished with additional information in January of 2022 and with new photos in November of 2022.