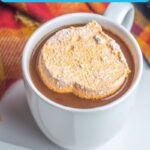 Pumpkin spice is an epic fall flavor, and warm beverages are the epitome of fall, so adding these incredible pumpkin marshmallows to a cozy drink is fall perfection. The easy homemade marshmallows don't just work in beverages but are just as delicious to bite right into.

Gelatin - Gelatin gives made from scratch marshmallows their structure. The texture of the marshmallows and the ability for them to hold their shape is due to the gelatin.

Corn Syrup - The corn syrup adds sweetness and also softens the texture of the gelatin softening it into the texture of a delicious and sweet cloud-like marshmallow.

Pumpkin Pie Spice - This is, of course, the key flavor in these marshmallows.

Corn Syrup - I use light corn syrup because that's what I keep stocked in my kitchen, but dark corn syrup would be delicious in this homemade Pumpkin Spice Marshmallow recipe!

Pumpkin Pie Spice - Both store-bought and homemade pumpkin spice works, and if you use homemade (or even if you don't!) you can adjust the levels of the different spices to make it the pumpkin spice flavor of your dreams!

Step 1: Combine all powdered sugar, corn starch, and 2 teaspoons of pumpkin spice. Line an 8x8 pan with parchment paper and cover the bottom and sides of the lined pan with the coating mixture.

Step 2: Put water and gelatin in the bowl of a stand mixer, and set aside.

Step 3: In a medium saucepan, heat sugar, cornstarch, and water over medium heat, covered, for 4-5 minutes.

Step 4: Uncover and continue heating until a candy thermometer reads 240° F, then remove from heat.

Step 5: Using the whisk attachment on the stand mixer, begin beating the gelatin mixture at a low speed while slowly pouring in the syrup mixture. Slowly increase the mixer to high speed and beat for 10-12 minutes.

Step 8: Cut into cubes, or use a cookie cutter to cut into shapes like pumpkin spice marshmallow pumpkins!

What can I do with Pumpkin Spice Marshmallows?

This homemade marshmallow recipe will be delicious with anything that goes well with pumpkin and marshmallow. Put them in your coffee or hot chocolate, or even your chai! Make them into pumpkin spice rice krispie treats, or cut them into cute pumpkin-shaped marshmallows and eat them straight out of the pan! We're not here to judge!

Are homemade marshmallows worth it?

Can you make pumpkin spice?

Yes, and it's so easy - you probably already have the spices in your pantry! It's a combination of cinnamon, nutmeg, ginger, and cloves, and some recipes include allspice as well. And it's not a typo - there is no pumpkin in pumpkin spice!

Tip #1: Combine the water and gelatin before you start the rest of the process. It needs time to sit before you start mixing it. This process is called blooming which softens the gelatin so that it will dissolve more easily when the other ingredients are added.

Tip #2: Don't be intimidated by the candy thermometer! Simply clip it to the side of the pot and make sure the tip of the thermometer is fully in the mixture, but is not touching the bottom of the pot.

Tip #3: Turning up the mixer just a notch or two at a time and letting the mixture thicken up a little bit between each increase will help prevent the sticky mixture from splattering all over your kitchen!

Tip #4: For pumpkin spice marshmallow fluff (or marshmallow creme), skip preparing the pan, and use the mixture straight out of the mixer. 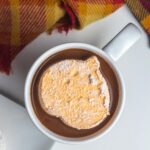 Combine the water and gelatin before you start the rest of the process. It needs time to sit before you start mixing it. This process is called blooming which softens the gelatin so that it will dissolve more easily when the other ingredients are added. Marshmallows are best stored in an airtight plastic or glass container, not in a zip-top bag. The provided nutrition facts are an approximation.

This recipe was originally posted on October 1, 2020, but was republished with new photos, additional information about the recipe, step-by-step instructions, FAQs, and tips and tricks in November of 2022.