Homemade marshmallows are surprisingly easy to make! Making marshmallows from scratch is how you can find yourself eating a perfectly spiced and delicious Apple Cider Marshmallow. Don't let the time it takes to make marshmallows fool you - this is a very low effort recipe!

These apple marshmallows make the best back to school gift or sweet fall treat! If you love apple cider recipes, you'll love these Apple Cider Cupcakes or these Apple Pop Tarts with Caramel Apple Cider Glaze.

Apple cider brings a perfect balance of spice to the sweetness of the marshmallows making this an ideal marshmallow flavor.

Apple Cider - The apple cider is both the liquid for the marshmallow as well as the flavor. Liquid is needed to bloom the gelatin (see Tips & Tricks) and to offset the stickiness of the corn syrup, making the apple marshmallows soft and cloud-like.

Apple Cider - Both homemade and store-bought cider will work for this fall-flavored dessert recipe, or for a fun twist, hard cider can be used as well!

Corn Syrup - I use light corn syrup for these Apple Cider Marshmallows, but dark corn syrup could add some richness to the flavor.

Spices - To enhance the spice in these homemade marshmallows, you can add additional apple cider spices to the apple marshmallows. Traditionally, apple cider is spiced with cinnamon, cloves, allspice, and nutmeg. Adjust the spices to get the flavor that you love most.

Spices can be added to the marshmallow mixture for the last 1-2 minutes of running the mixer, and can also be added to the powdered sugar and cornstarch coating, however be cautious with how much you add to the coating - the flavor will be strong!

Step 1: Combine the cornstarch and powdered sugar in a small bowl. Line an 8x8 baking pan with parchment paper and dust a light coating of half the mixture onto the bottom and sides of the lined pan.

Step 2: Place the gelatin and first cup of apple cider in the bowl of a stand mixer and set aside.

Step 3: In a medium saucepan, combine the second cup of apple cider, granulated sugar, and corn syrup. Heat covered for about 5 minutes.

Step 4: Remove the lid and attach a candy thermometer to the side of your pot, heating till the thermometer reads 240° F.

Step 5: Using the whisk attachment, start the mixer on low to begin combining the gelatin and apple cider. Slowly stream in the hot mixture.

Step 6: Slowly increase the speed of the mixer, and beat on high speed for about 10 minutes.

Step 8: Let set about 4 hours, then cut into squares or use a cookie cutter to cut into fun shapes like marshmallow apples!

Are homemade marshmallows worth it?

Absolutely, yes! Homemade marshmallows are infinitely better than a bag of marshmallows from the store. Once you try homemade, you will never go back! Especially when you can make so many delicious flavors like these spiced apple marshmallows!

What makes marshmallows squishy and fluffy?

The squishiness is a combination of gelatin, corn syrup, and a liquid component. The fluffiness is due to how long the mixture is whisked. The whole time your mixer is running, air is being whipped into the sticky mixture making them so light and fluffy!

Do you put marshmallows in the fridge to set?

No, the marshmallows will set at room temperature.

Tip #3: After streaming in the hot mixture, it's best to turn up the mixer just a notch or two at a time to avoid splattering the sticky mixture! 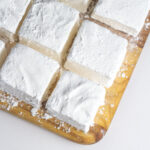 When using a candy thermometer, the tip of the thermometer should be fully immersed in the mixture but should not touch the bottom of the pot. After streaming in the hot mixture, be sure to increase the mixer speed slowly to avoid splatter. The provided nutrition facts are an approximation.

This recipe was originally posted on September 19, 2021, but was republished with new photos, additional information about the recipe, step-by-step instructions, FAQs, and tips and tricks in November of 2022.