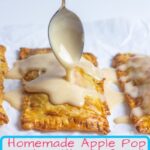 Homemade pop tarts can be super simple to make and they are so much fun! Plus, when you make them yourself, you can make sure the frosting goes all the way to the edges. Or if you're one of those people who prefers unfrosted pop tarts, this is a no-judgment zone - you do you! These Homemade Apple Pop Tarts are super approachable to make and are loaded with all the best fall flavors.

These DIY apple pop tarts are made by filling pie crust with homemade apple jam made with fresh apples, apple cider, and all the best fall spices. And best of all, these mouthwatering treats are topped with a homemade caramel apple cider glaze!

Apple Cider - The apple cider in this recipe is both the liquid component of the glaze as well as a reduction to add flavor to the pastry filling. A reduction is heating a liquid until it's about half the volume from where it started. This really highlights the flavor of the liquid you're reducing which is why apple cider is the perfect ingredient for that filling!

Apples - The apples are not only key to the flavor of these homemade apple pop tarts, but they also contribute to the texture of the spiced apple filling. As the apples cook, they will soften and are then mashed into the apple cider to give a bit of texture and consistency to the jam filling while also adding flavor.

Egg - Brushing the pie crust with egg before it bakes gives the crust its golden color and its shine. The yolk from the egg is key in this. Skipping this step or using just egg white will not give the same golden brown color and beautiful shine as using the whole egg will, but the apple pop tarts will still taste great!

Egg is also used around the inside edges to help seal the dough and prevent your filling from leaking out the sides.

Spices - Play around with the spices that excite you! I chose cinnamon (I used sticks, but ground cinnamon works too!), nutmeg, and cloves because these are the key spices for that apple cider flavor, but this filling can be spiced up however you like. That's one of the best parts of making a homemade jam from scratch - you can adjust to your tastes!

Pie Crust - I love using store-bought pie crusts. There are no rules in baking and if store-bought is your thing (it definitely is mine), go for it! Or if you love making homemade pie crusts, you can use that too.

For homemade pie crusts, you'll want to use a double crust recipe or half this recipe. One 9x9 pie crust makes 3 pop tarts and this recipe is written to make 6 pop tarts.

Homemade Apple Cider Filling - If you don't want to make your own filling, you can easily replace this with a store-bought apple jam or even apple pie filling or apple butter. You can make whatever kind of apple pop tarts excite you by changing up your apple fillings!

Caramel Sauce - The caramel sauce can be replaced with a little bit more cider.

Step 2: When the apples are soft enough, mash them with a potato masher, and let them continue cooking until you have an apple reduction, about 45 minutes to an hour. Remove from the heat and let the fruit reduction cool completely.

Step 3: Mix the cooled apple jam with cornstarch and set aside.

Step 4: Roll out the pie crust into a square, as close to 9x9 as you can get, then cut the crust into three long rectangular strips, about 3" wide each.

Step 5: Spoon the jam into the center of one half (lengthwise) of each strip, leaving the edges uncovered.

Step 6: Brush the uncovered edges of the pie crust with the egg, and then fold the strip in half (lengthwise) so that the empty side of the strip folds over top of the jam.

Step 7: Seal the edges with your fingers. You will want to work the edges until you can no longer see the seam where the two layers of crust come together. Then use the prongs of a fork to press down on the edges to form indentations around the edges.

Step 9: Combine all icing ingredients. You can adjust the measurements to get the icing whatever consistency you prefer. For a thicker frosting, add more powdered sugar. For a thinner glaze, add more apple cider.

How do you keep homemade pop tarts from getting soggy?

You'll want to be sure that your filling isn't too wet. In the case of this apple pop tart recipe, the cider and apple should be reduced until a thick jam forms. The filling is also mixed with cornstarch to help soak up some of the extra liquid in the filling. The egg wash also creates a golden crust on the pie crust that can help prevent it from getting soggy.

Should you cook your apples before putting them in a pop tart?

Yes! A pop tart does not bake for as long as a pie to allow the apples to get soft. This recipe guides how to cook the apples into an apple jam before filling the pop tart.

What is the best way to cut apples for pop tarts?

For this recipe, I cut them into approximately ¼" - ½" cubes. They don't have to be completely uniform since you'll be mashing them up, but if they are somewhat similar sized they should soften around the same time making them easier to mash all at once.

Filling Tip #1: Make the apple filling the night before you plan to make the pop tarts so it can cool overnight and you can jump straight into assembling and baking your apple pop tarts when you're ready to bake.

Filling Tip #2: If you don't have a potato masher, you can use a fork to mash the apples but be careful not to burn yourself. The pot and mixture will be hot!

Crust Tip #2: If using the roll-out pie crusts, they are often circular so it can be challenging to roll it into a square. Just get it as close as you can, and then cut off the edges to make it closer to a square.

Crust Tip #3: Pinching the edges of each pop tart together with a bit of the egg on your fingers can help seal the edges. If you can see the seam, your filling may leak out as it bakes.

Crust Tip #4: Be cautious that the tip of the fork does not puncture the part of the dough that's holding the filling. The fork should also just imprint a pattern on the edges and should not be pushed all the way through.

Icing Tip #1: Make the icing thicker than you will want on the pop tart. It will spread and run off the pop tarts resulting in a thinner coating than what you put on. If you're going for a glaze, you'll want the icing to be thick, but when you stick a spoon into it and pull it out, it will smoothly run off the spoon.

Icing Tip #2: If you prefer a thicker icing, you'll want the mixture to have some resistance when stirring, and hold onto the spoon, but slowly run off all at once (so the whole spoonful comes off together instead of streaming off in ribbons). 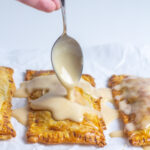 The apple cider filling can be made the night before so it can be cooked and cooled before assembling and baking your apple pop tarts. Store-bought pie crust will need to sit out at room temperature before unrolling, even if not frozen. Check the package for detailed directions. Make the icing or glaze thicker than you think you'll want. The icing will run off the pop tarts as it sets resulting in a thinner coating than when you spoon the icing on. See Tips and Tricks above for more info. The provided nutrition facts are an approximation.

This recipe was originally posted on October 29, 2020, but was republished with new photos, additional information about the recipe, step-by-step instructions, FAQs, and tips and tricks in October of 2022.