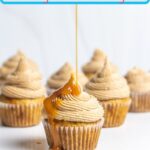 Apple cider is a perfect fall drink so it's only logical that it also makes the perfect fall dessert! These homemade Apple Cider Cupcakes with Cinnamon Brown Sugar Frosting are so easy to make and are the epitome of what fall should taste like! So grab your favorite cider (or even your favorite hard cider!) and whip up these fabulous fall treats!

The spices of the cider balance so beautifully with the sweetness of the cupcake. Adding the cinnamon and brown sugar to the spiced apple cider frosting gives it an extra bit of fall flavor making this the best fall cupcake!

Apple Cider - Apple cider is the key flavor in this cupcake. The cider also serves as the liquid in both the cupcake and the frosting. In the cupcake, this gives the batter a consistency that leads to moist and delicious cupcakes. In the frosting, this replaces where you would often see milk in a buttercream, giving your buttercream frosting the perfect consistency.

Apple Sauce - Apple sauce can often be used in baking as a fat, replacing butter and oil. This apple cider cupcake recipe still calls for butter, but the applesauce adds both flavor and moisture to the batter, resulting in the best moist apple cupcakes!

Melted Butter - Melted butter will lead to a slightly denser cake than using cold or room temperature butter, but using melted butter gives you the extra flexibility to brown the butter which adds an extra depth of flavor to these already incredible apple cider cupcakes.

Apple Cider - I highly recommend using hard cider in place of apple cider in this tasty cupcake recipe. Sparkling cider will also work great. Whatever cider you choose to use, its flavor will be the star.

Brown Sugar - Brown sugar is added simply for flavor and can be skipped for a simpler apple cider frosting.

Cinnamon - The cinnamon is also added solely for flavor. Have fun with it and change up the spices however you like to highlight a variety of fall flavors.

Step 1: In a small mixing bowl, combine the cider and melted butter.

Step 2: Stir in the sugar. The mixture may be lumpy, but it will all come together, I promise!

Step 3: In a large mixing bowl, combine the applesauce, eggs, and vanilla, then slowly add the cider mixture.

Step 4: Add the flour and baking soda, and mix until combined.

Step 6: Combine all the frosting ingredients and beat with an electric mixer until smooth.

Step 7: Pipe or spread frosting onto cooled cupcakes and enjoy!

I generally use a soup spoon to spoon my batter into the liners to try to avoid spillage, but an ice cream scoop is a popular method as well because it's generally the right size for the cupcake liners!

Cupcake batter will rise while baking, so most recipes fill the liners about halfway to two-thirds of the way up to avoid the batter overflowing in the oven. Many recipes will either tell you how much to fill the liners, or when you divide the batter evenly among the number of cupcakes the recipe makes, each liner will only be filled part way.

Do you grease cupcake liners?

No, cupcake liners are used in place of greasing your pan.

Can you overmix cake batter?

Yes! Before adding the flour, you have a lot of flexibility to mix, and in fact, the more you beat air into your butter, the lighter and fluffier your cupcakes will be. But once flour has been added to a cake batter, the goal is to mix the mixture as little as possible. Overmixing the batter can result in a dense, gummy cake.

Trick #1: If you don't have paper liners, cut out squares of parchment paper about double the size (in each of length and width) of the circle of the muffin pan and press into the cup.

Trick #2: If you don't have piping tips and piping bags, put frosting in a zip-top bag and cut off a small corner to pipe frosting onto cupcakes.

Tip #3: Ensure the cupcakes are fully cooled before adding frosting or the frosting will melt. 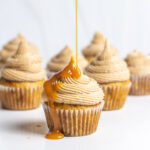 Replace the apple cider with hard cider to spice these up! Drizzle caramel sauce overtop of cupcakes to add another layer of flavor, and sprinkle sea salt on top for a salted caramel flavor. The provided nutrition facts are an approximation.

This recipe was originally posted on November 26, 2016, but was republished with new photos, additional information about the recipe, step-by-step instructions, FAQs, and tips and tricks in October of 2022.