Over the past few months, my husband and I have been watching the show Impractical Jokers quite a bit. It’s light, fun, and funny, which has brought a lot of joy during a particularly difficult year.  As a gift, I got my husband some R&H Beer, a brewery owned by one of the guys from the show. I also really liked the fact that the Brew Master is female, so I wanted to use this brand of beer.  I decided to start with the IPA and used it to create this delicious and Spiced No Yeast Beer Bread, and as an added bonus, this no yeast bread recipe takes just 30 minutes to make!

I happened to catch a few R&H Beer Instagram videos where they did beer pairings with Halloween candies. They paired the IPA with hot tamales in their Halloween candy pairing, so I did a little research and according to the Internet, hot tamales are most likely made with cassia, not cinnamon.  Cassia is very similar to cinnamon, and I happen to have some cassia. My husband got me a Root for Women box from a local, woman-owned spice store, Curio, and cassia was included in that box.  These flavors combined so perfectly to make this soft, moist, flavorful Spiced Beer Bread.

IPA - I specifically selected IPA for this easy beer bread recipe because in the beer pairing videos, the IPA was paired with the cinnamon-flavored candy. The IPA pairs so perfectly with the cinnamon flavor so this is my recommendation, however you can certainly use any beer you'd like.

Cassia or Cinnamon - I used cassia in this easy homemade beer bread recipe because that's what the Internet says is in Hot Tamales (the candy!) and because I just happened to have it. Cassia is so similar to cinnamon, so much so that most of us likely can't taste a difference, so cinnamon will work just as well here!

Baking Soda and Baking Powder - Since there is no yeast in this easy homemade bread, the baking soda and baking powder give the bread its rise.

Preheat your oven to 350 F and grease a loaf pan or cupcake pan.

Beat together butter and sugar.

Add the eggs and mix, then add the beer and mix.

Fill a mini loaf pan or cupcake pan till each cup is ¾ full.

This bread has a mild beer flavor with a hint of cinnamon. While the beer flavor comes through, the subtle sweetness of the bread completely removes the bitterness of the beer.

Can you get drunk off beer bread?

Is cassia the same as cinnamon?

They are not the same, but they are very similar. Cassia is a bit stronger and more bitter, while cinnamon is sweeter. When ground, they are difficult to distinguish. 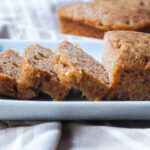 This bake time is based on a mini loaf pan, but you can make this in a full-size loaf pan too. Just be sure to increase the bake time accordingly! Once you add the flour, you want to mix the batter as little as possible while making sure the flour gets fully incorporated.

This post was updated in May 2021 with new photos, an updated recipe, and additional information about the recipe.