Fat Tuesday is this week and I've never been to Mardis Gras, but I absolutely love New Orleans.  The city is so fun and so beautiful and the food is unreal. Of course, my initial thought for a Mardis Gras recipe was a King cake, but I wanted to give it my own little twist. I also considered a beignet because it's basically my favorite food in New Orleans. But I also want to keep my recipes as easy as possible.  When I look at a recipe, even though I love baking, if it looks difficult or time-consuming I procrastinate on making it and then end up buying a box at the last minute.  Some of it is probably that I love sweets way too much and just want the final product to be ready! But a lot of it is because I live in a tiny apartment with a teeny tiny kitchen and a complicated recipe is stressful.  Especially when I know I can make something just as good with a lot less stress! 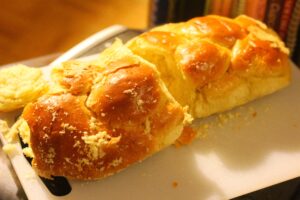 I used day-old challah from my grocery store. It didn't look pretty, but I will be cutting it up anyway!

Since the originally planned recipes were becoming super complicated, I decided to change course.  I was watching Top Chef (are you all watching this season in my hometown of Louisville, KY?!) and *SPOILER-ISH ALERT?* they each select one of Muhammad Ali's fights and make a dish inspired by that fight.  Kelsey from Alabama selected a fight in New Orleans, which also happened to be the last dish of a progressive meal (hello, dessert!), and that's when my ears perked up. I was looking for inspiration for a Mardi Gras recipe, and at that very moment Kelsey is going to come up with a New Orleans inspired dessert recipe! That's when Kelsey says that bread pudding is a traditional New Orleans dessert.  This wasn't something I knew, but it was definitely something I could work with! 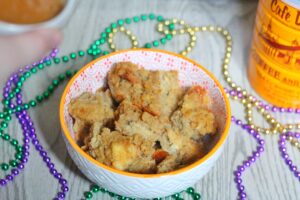 I also couldn't pass up the opportunity to use Cafe du Monde coffee. If you haven't been to New Orleans, Cafe du Monde is the go-to place for beignets and coffee, but not just any coffee, chicory coffee, most commonly served as a cafe au lait. So the idea of a cafe au lait bread pudding was inspired, and this was an inspiration I didn't know I needed, but am so glad I found! So thank you Top Chef, thank you, Kelsey, and thank you New Orleans. Laissez Les Bons Temps Rouler, y'all!

Check out this recipe for Caramel Chocolate Coconut Bread Pudding! 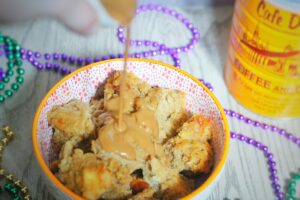 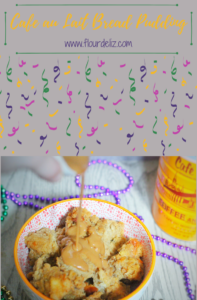 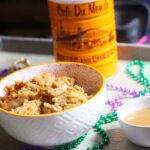