Full disclosure: I've never been to Mardi Gras in New Orleans, I'm not one for crowds and chaos, but I love the fun that comes with it! The incredible music, beautiful colors, epic parades, and delicious food make for the ultimate southern celebration and, if you're not local, a perfect party theme! And while King Cakes seem to be the most common and traditional Mardi Gras dessert, you know I like to keep things interesting, so I did a bit more digging and discovered milk punch. Milk punch is a rich cocktail similar to an eggnog or a white russian which makes it the perfect flavor for mini Mardi Gras cheesecakes!

I've seen a variety of milk punch recipes, but they are all milk-based with booze and nutmeg added. Most often they tend to use bourbon, brandy, or both, but I've also seen recipes that use rum. In this recipe, the cream, vanilla melts, and cream cheese serve in the role of the rich and creamy milk, the nutmeg is added to the crust, and the booze is strong and smooth. They all come together seamlessly in this delicious single serving treat inspired by a traditional southern cocktail.

If you're looking for something other than a King Cake for your Mardi Gras party, these mini spiked cheesecakes will fit the theme perfectly! They're quick and easy to make and make the best Fat Tuesday treat - no springform pan or water bath needed!

Nutmeg - Nutmeg is one of the main flavors in milk punch so it is a necessary ingredient to take these from basic boozy cheesecakes to epic Mardi Gras cheesecakes.

Vanilla Melts - These are fairly flavor neutral, much like milk, and they also melt smoothly and re-solidify to give the cheesecake its structure. You could also melt white chocolate, but it will be much sweeter so I would suggest using vanilla melts if you can get your hands on them.

Cream Cheese - It wouldn't be cheesecake without cream cheese! This Mardi Gras cheesecake recipe does not need sour cream, so the cream cheese is the only source of cheesecake tang!

Bourbon - I prefer bourbon so that's what I wrote into the recipe, but you could also substitute brandy and still have a traditional milk punch flavor. But I am also always an advocate for adjusting ingredients to fit your taste so if you prefer rum, maybe even a spiced rum, or another whiskey, that should also be delicious in this recipe!

Combine vanilla wafer crumbs, butter, and nutmeg until the crumbs are fully moistened and the nutmeg is evenly dispersed throughout the mixture.

Press the crumb mixture into the bottom of the 12 cups of a cupcake tin and bake for 5-7 minutes.

Combine the vanilla melts, heavy cream, and bourbon in a double boiler, stirring until the mixture is smooth.

Remove from heat and let cool.

Beat cream cheese into the bourbon mixture until smooth, and then spoon in to the muffin cups on top of each crust.

Chill the mini Mardi Gras cupcakes for at least one hour, but longer is better, to allow them to fully set.

Is milk punch the same as eggnog?

Eggnog is a type of milk punch, but the flavors are quite different. If you prefer an eggnog cheesecake recipe, I have one for you here! But if you like bourbon (or brandy), I highly suggest giving this milk punch cheesecake a try.

What is milk punch used for?

In some places milk punch is primarily a Christmas or holiday drink, but it is less seasonal in New Orleans, making it perfect for a Mardi Gras celebration! 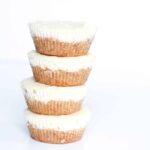 If the cream cheese is cold, it may form clumps as you beat it in to the bourbon mixture. It's okay if this happens, it will still taste great! But for a smoother cheesecake, let the cream cheese come to room temperature before adding it in.

This recipe was originally posted on February 13, 2020, but was republished with new photos, additional information about the recipe, step-by-step instructions, FAQs, and tips and tricks in February of 2022.